I just turned on the tape recorder on my phone for the whole drive back from the bar. This is what was recorded.Happy Goth was sitting in the passengers seat when she realized that I was taping everything.

The bachelorette’s costume evolved over the course of the evening. Especially as she opened presents at the bar we ended up camping out in.

The drag show was in a clear spot about two feet wide on the floor. We watched from the back window and then found a quieter bar to open presents.

By the end of it, we had the whole bar singing. You can’t NOT sing to Queen!

Yeti is awesome! It’s a Fuzzhats Yeti but fuzzhats.com seems to be down. The cowboy hat is holding a lobster named Eddie (as in Eddie Izzard who did a bit about Himlic who invented a Manooover “hooja hooja hooja lobster”) and a Koala bear hat.

Oh yeah, and they got the squid hats here; http://www.etsy.com/shop/ObeyMyBrain 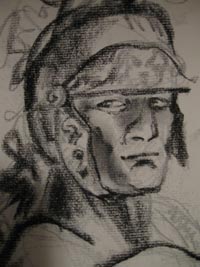