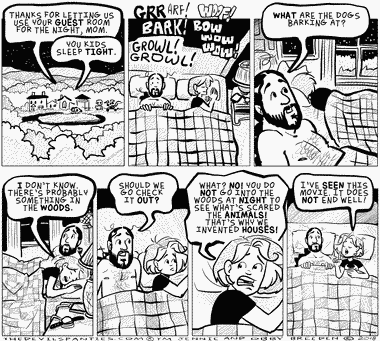 There’s an awesome guy who does the geek auction every year at What the Hell con. Last year, 2010, he gave me his geek auction application and asked me to fill it out. He said, “do what ever you want”. I said “are you ssuuuuuuure?” He grinned and backed away. I filled it out with the input of some other twisted- er, other artists, and handed it in without him seeing it. Under the questions “what’s your favorite fandom?” I asked the room what the most innocent childhood cartoons they could think of were. We came up with Care Bears and My Little Pony. I just added the word “slash fic” (meaning fictional erotica written by fans). The auctioneer women just went from there. The pointed out that one of the guys had to be the Bear and one had to be the …”Pony”. At one point they got one guy to carry the other around on his back. Everyone died laughing and the guys seemed to have a good time. Um, apparently he had such a good time that he never forgot it and uh, is going to exact his revenge.