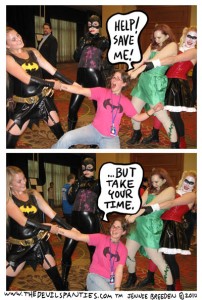 Yeah, I had a lot of fun at the Dallas Texas Anime convention Akon. There’s something about Geek Girls who revel in cosplaying strong latex clad villains (and heroes) that makes me all tingly in the good way. I’m not too sure if I want Batgirl to save me from the nefarious intentions of Harley and Poison Ivy. Catwoman seems to be on the fence about weather she’s going to help or hinder.

As much as I post comics about pretty ladies, I prefer the boys equipment. I just recognize an aesthetically pleasing figure no matter the gender. I get mildly frustrated when there’s a negative post in response to a male figure. There seems to be a double standard in regards to the exploits of the male form. Show a woman in a thong; “oh baby oh baby”. Show a man in a thong and you invariably get someone saying “ew gross, I don’t want to see that.” Mostly I’m referencing a time that I posted on twitter a link to a compilation of photos of hot soccer players. One response that I got was a guy saying “ew, dudes, gross.” Well yeah, I may find girls pretty but I find guys HOT and it’s frustrating that there’s this automatic assumption that “sexy” means “woman”. At least, that’s the majority. I revel in a woman who can show off her curves. I love drawing comics about women who are comfortable with themselves. But I’m attracted to guys. It pisses me off when I try to show off guys who express their sexuality and are shot down for it. Revel in what you find atractive and pay no attention to the trolls behind the curtain.