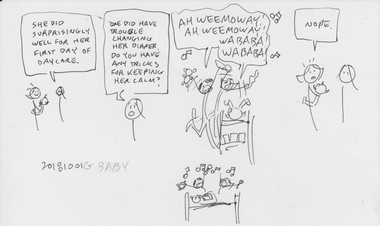 I went to the East Atlanta Farmers Market There was vendors selling lots of lettuce but also goat cheese and home made yogurt. An ice cream vendor soldÂ coconut lemon grass pops and bourbon pecan sorbe. I felt a bit out of place because I didn’t have a stroller. I was sitting next to one of the boxed gardens and ice cream van with my shoes off and munching on a grapefruit and mint pop. A woman was going to the ice cream stand and her little blond toddler walked right up to me and plopped down in my lap. Her mother apologized but I thought it was awesome. I told the mother that once before I had a random little girl sit down in my lap at a parade. Hours later another woman waved to the girl, her hair in the same ponytail as mine. The little girl looked from the other woman to me and jumped up. Turns out I looked like her baby sitter. At the farmers market, this little girls mother and I joked about how I had ice cream and her mom was just standing in line for ice cream but the toddler had no interest in my popsicle. A moment later I could feel … a rumbling in the toddlers diaper. I told her mom that she was, as my brother puts it, “having a meditation.” After that, the toddler got up and went with her family to a table to eat their ice cream. Apparently I make a lovely toilet. I’d be upset if the diaper had a leak, as it is I just think it’s cute.