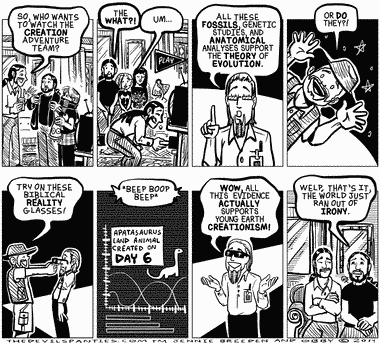 So Happy Goth’s husband found a set of Creation Adventure Team DVDs, and somehow convinced us to watch it. We were expecting it to be so bad it’s good, but it blasted right past bad and became nearly unbearable to watch.

Eventually, though embarrassingly not immediately, it finally clicked for me that this wasn’t some great creationist treatise, but a simple brainwashing film meant to indoctrinate children. That was the horrifying part, and something the creationist camp gleefully admits to.

The Biblical Reality Glasses were an actual thing from the video. They were glasses that you needed to put on to see the creationist version of the truth. I couldn’t have made a better analogy if I tried.